The Big CIO Show & Awards convened more than 150 CIOs and IT leaders from across industry verticals in India. The conference concluded on a high note, honouring innovators and leaders for spearheading successful technology implementations in their organisations

Wednesday, June 1, 2022: India played host to one of the most content-rich conferences that took place at Taj Lands End in Mumbai on 18 May 2022. Hosted by leading global business events and consulting firm Trescon, the show included a glittering awards ceremony with the “Innovator’s Awards” and “Leader’s Awards” honouring more than 100 CIOs and tech leaders in India. The event featured prominent global technology providers who showcased innovative enterprise technology solutions that help businesses become more efficient and resilient to market conditions. 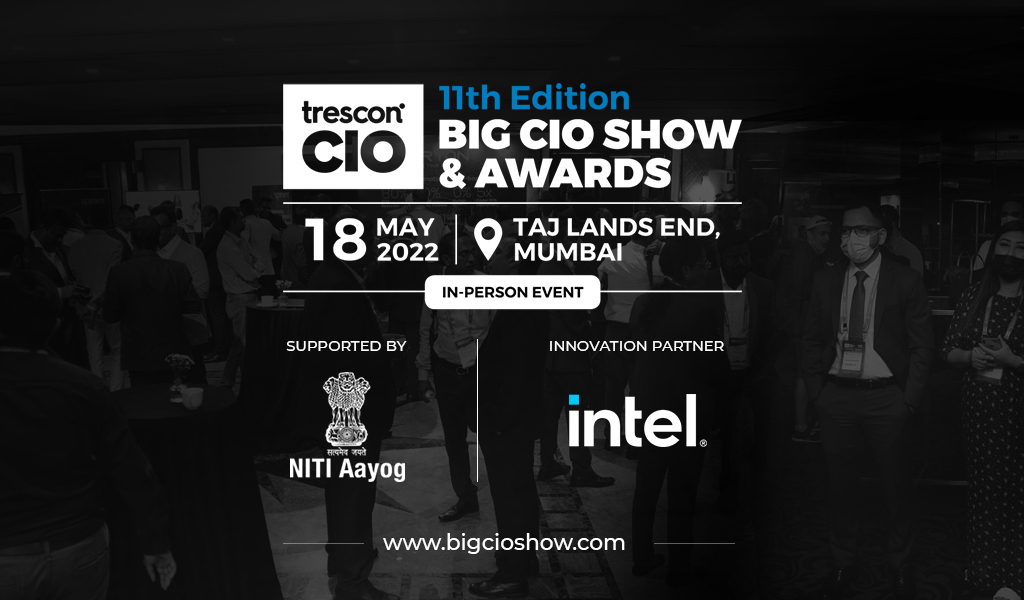 The show featured discussions on some of the most trending opportunities and challenges, including: The future of digital leadership; data-first, data-anywhere business model; next gen data and AI platforms; To name a few, there is data in motion; a winning WhatsApp commerce strategy; the value proposition of cloud-centric virtual worlds; automation and composable technology; and a roadmap to a secure and scalable hybrid workforce.

Dr. Neeta Verma, Director General, National Informatics Centre, MeitY, spoke at length on the topic “Reimagining a Digital Nation with Innovation & Sustainability at its Core”, where she made strong points on the ideals of sustainability and expressed how important carbon neutrality will play in our country.

Vikram Chauhan, Head of Enterprise & Government Business for Intel India, while delivering his tech talk on “India Fast Forward: Technology-led Transformation”, stated that the technological capabilities that cloud on-boards are totally unmatched, and added that the cloud is a cornerstone of today’s technology.

Caesar Peter, Head of Solution Engineering – Asia at Confluent, shared his insights on ‘Rethinking Data: Set Your Data in Motion to Win in the Digital Economy’. He was quoted as saying, “People today want instant connectivity in real time.”

In his panel, RaviKiran Avvaru stated that “having a monetary benefit cannot be the sole purpose of investing in an application. There are other KPIs which come into play, and one prime indicator is customer satisfaction.”

“The Big CIO Show & Awards has served as a platform for recognising the unsung heroes who are innovative, have succeeded in their respective disciplines, and have helped their organisations achieve great success via their efforts.” We are happy to have hosted all these experts on our platform and look forward to hosting them again on our future initiatives. I would also like to congratulate all the top 100 CIO Leaders and Innovators in India who won the Big CIO Awards, “stated Mithun Shetty, CEO, Trescon.